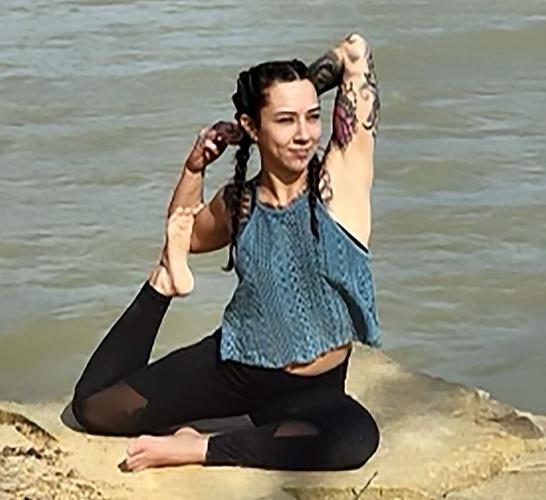 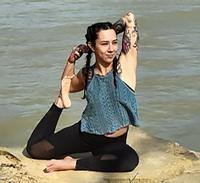 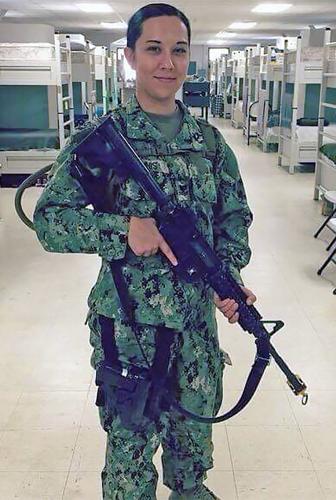 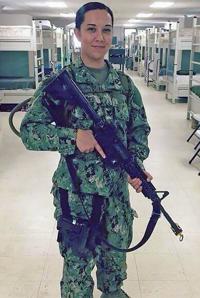 Kim Parker poses for a photo during training.

Kim Parker poses for a photo during training.

Kim Parker is a yoga master, but before she became one with herself, she was in the Navy Reserve.

Like many other recruits, Parker decided to join the military at age 22 primarily for the college benefits.

“I knew some people that were in the National Guard, which is similar to reserve, but they were going to college and getting a small check,” Parker said. “I was in college at the time, so I thought that it might help me financially and help me get out and get experience in life.”

“Basic training was a lot of waking up early,” Parker said. “A lot of PT, working out, a little bit of getting yelled at and lots of cleaning. You know, our spaces had to be pretty much spotless or we’d get yelled at some more.”

Around 15% of recruits who join the military fail out of basic training, but Parker said she breezed through with flying colors.

“My recruiter told me going in to try not to take it so seriously,” Parker said. “I guess that people that break down because they are taking it too seriously, so I went in with the attitude of like, alright, you are yelling at me, whatever. It’s going to be over soon.”

Keeping her eyes set on the goal of getting through boot camp, Parker was able to successfully complete basic training and move on to job training.

“The thing about the reserves is that you go through the basic and job training and then you kind of come back to civilian life,” Parker explained. “And then you drill once a month and go out during the summer for like two weeks for training. Being in the reserves is similar to always being on-call, but you can get sent on active orders.”

Through the reserve, Parker said she became something greater than herself.

“In the military, there’s a camaraderie among us,” Parker said. “It’s this brotherhood-sisterhood mentality that there’s no soldier left behind. We are in this together.”

After completing six years in the service, Parker was ready to discharge.

“When I decided to leave, I struggled with PTSD,” Parker said. “I didn’t really know what was going on at the time.”

According to dosomething.org, depression and post-traumatic stress disorder (PTSD) are the most common mental health problems faced by returning troops, with 30% of soldiers developing mental problems within three to four months of being home.

Suicide and suicidal thoughts are common issues for veterans and active-duty military, with veterans at a 57% higher risk of suicide than those that haven’t served, more than 1.5 times the national average.

“For me, I guess I didn’t really realize the how stressful it was while I was in,” Parker said. “I didn’t know what was going on at the time and I just felt down and was sad and I didn’t really know why, I just knew that I didn’t want to be here anymore.”

Faced with a choice between life and death, Parker gave herself an ultimatum.

“At the time I was like, if this is how I’m going to feel from now on, then what’s the point,” Parker remembered. “I guess I just eventually talked some sense into myself and made a promise to myself to give it my all and see where I was at in a year from now.”

Finding solace in meditation and yoga, Parker began to see a change.

“I listened to a lot of motivating and optimistic podcasts,” Parker added. “Meditation, which, in yoga, we consider meditation a part of yoga practice, really helped me out of that place. Going back to the events of PTSD and taking the time out to decipher where the trauma and anxiety and sadness was coming from and then processing it.”

Physically and mentally stronger, Parker has been able to channel her passion into a new path, once again, choosing something larger than herself.

Working with all kinds of people, from veterans to people with disabilities, trauma victims to those wanting to connect with their inner selves, Parker now works as a yoga instructor.

Over time, Parker has been able to play a part in healing others physically, mentally and spiritually with the power of yoga and meditation.

“There’s a woman here that has MS and was in a wheelchair and she started doing yoga and now she’s walking around just fine,” Parker said. “Mentally, it helps people with anxiety, depression, all kinds of issues really get to understand themselves and figure out who they are. Seeing that growth is really something.”

“Some people have issues closing their eyes, so we give the option to lower their gaze to the floor or not close their eyes completely. No one ever has to do what we say if they are not comfortable. The most important part of yoga and meditation is being comfortable and relaxed. Part of how I do that is being honest and open with them. Giving them the freedom to do what they want and verbally saying that, you know, they don’t have to do anything if they don’t want to and they are always welcome to leave if they are uncomfortable.”

With her military service in the rear-view mirror, Parker continues to march forward, using the skills she developed in the reserves in her everyday life.

“Everything that I’ve gone through has definitely given me a leg up in life,” Parker said. “It helped with discipline and not giving up despite setbacks; pushing through the hard things and acknowledging whatever is controlling you.”