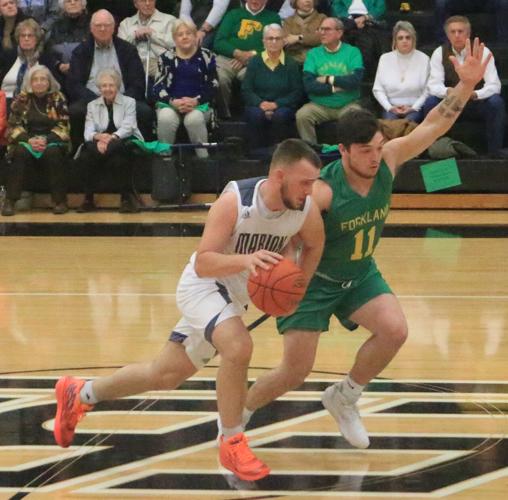 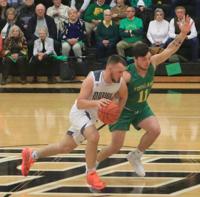 Mason May pushes the ball downcourt in Saturday’s game against Boyle County. It was May’s second game back after suffering a concussion earlier in the season.

Mason May pushes the ball downcourt in Saturday’s game against Boyle County. It was May’s second game back after suffering a concussion earlier in the season.

It was another harsh week for the Marion County Knights.

Standing apart from the previous two weeks, which saw the Knights either claim a victory or come up short by mere inches in a competitive evening, Marion County’s three games last week saw the team crushed under the momentum of their opponents.

Their final game against Boyle County (61-32) proved to be their closest, with a 29-point deficit by the evening’s final buzzer while also suffering losses to Franklin (71-33) and Garrard County (87-56).

These losses push the Knights’ season further down, with the team holding a 1-17 record after Saturday’s game.

Despite coming out with some energy, and holding off the Rebels for the first two minutes, the Knights finished the first quarter with only a single basket scored. The basket, courtesy of senior Mason May, who returned to the court this week after suffering a concussion in December, stood in stark contrast to Boyle County’s 16. The Rebels continued to lead for the remainder of the half, entering halftime 25-7.

The Knights showed a bit more momentum upon their return, moving from 7 to 21 in the third quarter as the various members of the team took their crack at the basket, including a three-point shot by sophomore Rashaud Brown and a pair of and-ones by junior Brady Hutchins and freshman Christian Rucker. Unfortunately, these efforts proved insufficient to catch up to their competition. with Boyle leading by 25 at 46-21 by the end of the third. The team went on to widen the gap in the fourth despite the Knight’s efforts, going from 57-32 to 61 in the final minute with a string of successful baskets to close out the game.

Despite the result, Knights head coach Maze Stallworth focused on the improvements to the Knight’s defensive efforts compared to the previous games last week, seeing them as a necessary improvement for the team going forward.

“I think we had a great effort from the team,” said Knights’ head coach Maze Stallworth. “We couldn’t hit the shots but we kept moving the ball, they related to each other and kept talking to each other… Despite the score, we made defensive improvements, which was good.”

The Knights were led by Rucker with seven points scored.

While Saturday was not a high point for the Knights, the team suffered a pair of larger losses earlier that week in their games against Franklin County on Tuesday and Garrard County on Friday.

While seeing the return of senior Mason May to the court, Friday’s game also proved a struggle for the Knights, falling behind in the first quarter.

Despite the Golden Lion’s lead, the Knights nonetheless were able to hold on somewhat in the first half. The team was led by May close to the net with 10 points worth of two-point shots while Hutchins led overall with four successful three-pointers, three of which came in the second quarter. Despite this showing, the team proved unable to keep pace with Garrard, who led 44-32 by the start of the half.

This dynamic shifted after the teams came out of halftime, with Garrard County shooting up 30 points to Marion County’s six in the third quarter through a series of baskets by Golden Lions seniors Ethan Cooper and Ian Alcorn as well as sophomore Jaydon Noe, going on to finish the game 31 points ahead.

Tuesday proved a more even experience, with Franklin pushing ahead early, reaching 30 by the first buzzer, and maintaining a sizable lead throughout the evening while deflecting Marion County’s offense. The Knights had a particularly poor showing at the free-throw line, making only two of eleven baskets for 18.2%.

The Knights were led by Jalil Smith on the board Tuesday, the junior scoring 10 points for the team, while May lead Marion County on Friday, scoring 17.